Economics is full of complex models and ideas, curious about the world and the people in it, and misunderstood by many (sometimes me included).

1. What is the insipiration behind your career in Economics?

I was first drawn to the field of economics through my love of philosophy and psychology (I often joke that if I could, I would opt for a career as a philosopher over an economist). The overlap between game theory and philosophical problems such as the famous trolley car dilemma really got me hooked. After that, it was only a matter of time before I realised just how applicable economics is to every area of life. Now I think of economics as an incredibly versatile tool that can be used to understand people and the impact of the incentives placed around them.

2. Describe one of your research projects?

I am currently running the 8th iteration of the World Internet Project (WIP) in NZ. WIP NZ is a survey-based research project which aims to answer key questions about the role the internet plays in our lives and what users are doing online. In the 2023 version of the survey, we are also looking to understand people’s attitude towards the environmental impacts of internet use and the impact of working from home.

3. What do you hope to achieve with this project?

This project, in conjunction with the international project will inform numerous companies, government departments, individuals and organisations. The aim of the project is to provide information and insight that can assist in community development, and in policy decision-making.

4. What makes this research impactful?

The pervasive use of the internet exerts an increasing influence on our social, political and economic lives. Globally, an estimated 66% of the world population were internet users, as of March 2021. WIP investigates the evolution of this technology, focusing on areas such as: online privacy and security issues and concerns, the internet’s influence on political power, freedom of speech over the internet and social interactions.

5. What do you enjoy doing in your spare time?

In my spare time I enjoy getting out of the city and enjoying scenic walks and hikes, watching Netflix (or Amazon Prime or Disney+) with my cat, Theo, and getting out for as many runs as possible. I’ve recently completed my first half marathon in Queenstown, and I can honestly say that I’m addicted to running!

6. Do you have any advice for anyone who might want to do their first half-marathon?

I’m definitely not an expert in running by any means, I started training last year, unsurprisingly couldn't even run a full kilometre without stopping. I was the kid who faked an asthma attack to get out of cross country in high school and threw up after getting the lowest level needed to "pass" the beep test. If I could pass on one piece of advice though it would be to take your time and enjoy the journey of being a first-time runner. Not every run is going to feel great, but you are lapping everyone on the couch (including former you), so make sure you remind yourself often of how far you’ve come! 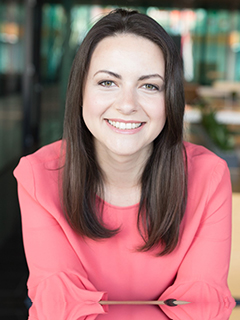